Welcome! This website is all about the Aurebesh, the 'alphabet' from a galaxy far, far away. Here, you will learn to read, translate and write in this fictional writing system.
If you want to learn more about the Aurebesh, how to use this website, or how to install Aurebesh on your own computer, keep reading. Otherwise, jump right in by selecting an Aurebesh trainer from the menu: 'Read Aurebesh' and 'Write Aurebesh' will teach you to read and write in Aurebesh in no time. You can also use the translator to instantly transform any text to Aurebesh.

Get the app
The Aurebesh trainer app is available on Android

...or keep scrolling to learn more about the Aurebesh!

Aurebesh is the Galactic version of the alphabet. Like the alphabet, an acronym of the Greek letters Alpha and Beta, the Aurebesh is named after its first two letters: Aurek and Besh.
Aurebesh was a writing system used to transcribe Galactic Basic, one of the most used languages in the galaxy.
-Wookieepedia
Galactic Basic is the in-universe name for the English language.

Aurebesh writing can be seen in the background in the movies, animated shows, video games and comics. It can be read on displays, holographic advertisements, uniforms, helmets et cetera. Being able to read Aurebesh allows you to immerse yourself even more in the galaxy far, far away. It's not hard to learn, because it's basically the Latin alphabet with different characters.

How does the Aurebesh work? 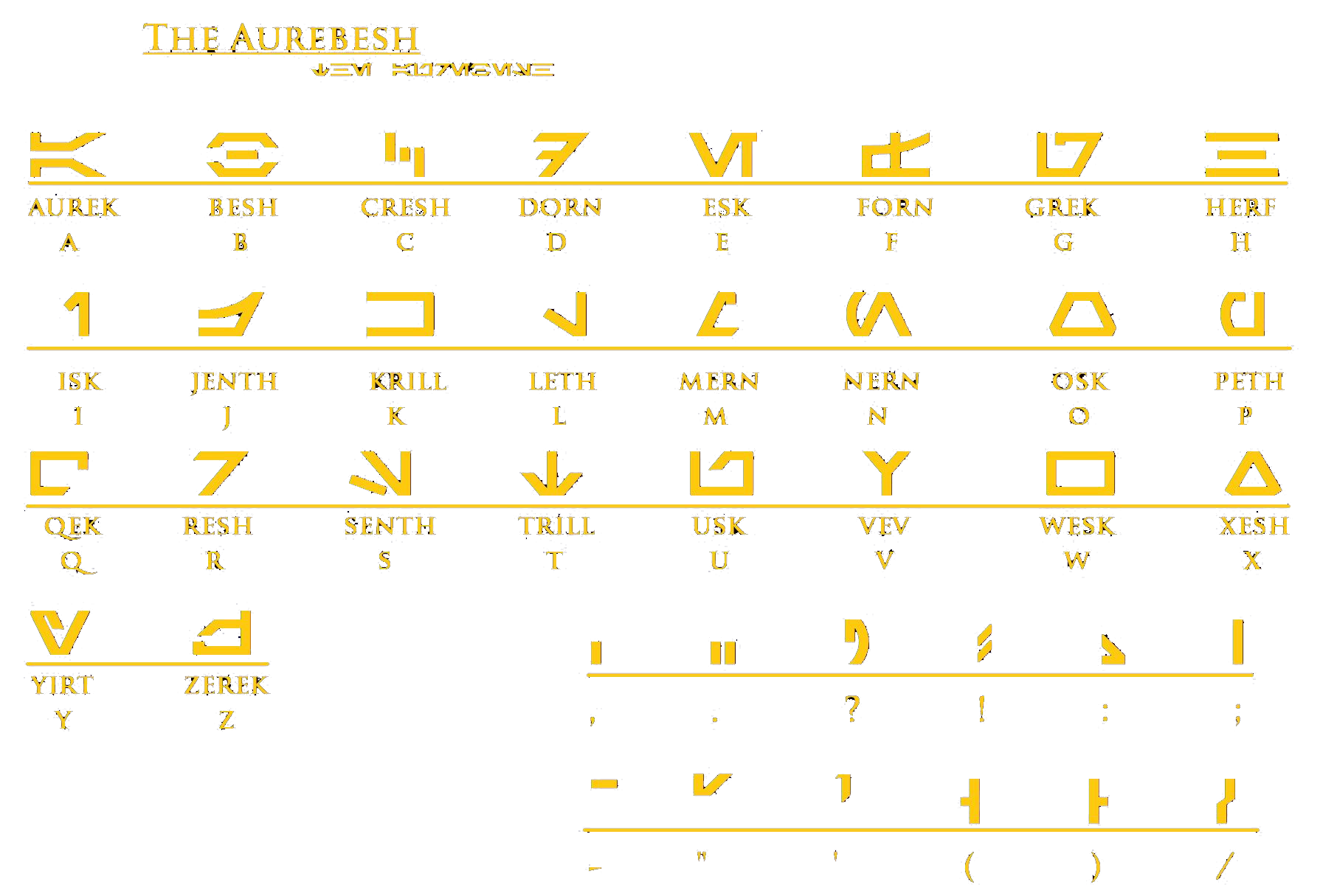 As you can see, the Aurebesh has every letter we do, but with a different name and symbol.
The only other difference is in Aurebesh, there are some digraphs (a combination of two letters representing one sound) that are written as one letter (called a ligature). For example, c + h ( C + H ) becomes Cherek ( ch ).
Although in canon material, these ligatures are not always used and sometimes the two separate letters are used rather than the ligature. In fact, ligatures are, canonically, never mandatory. You can write in Aurebesh without using ligatures and it would still be correct.
The font that is used on this website automatically creates ligatures. For example, an 'h' after a 'c' becomes a 'cherek'. Try typing 'c h' and then 'ch' in the following text field:
This also works for ae, eo, kh, ng, oo, sh, th.

To start learning, go to the Menu and choose Read. This is an Aurebesh trainer where you translate words from Aurebesh to English by typing them in a text field. If you want to start by learning one symbol at a time, choose 'First steps' from the categories bar at the top. Simply type what you think is the correct translation and when you press Enter, it will tell you whether you were correct. Got it wrong? No problem! Try again until you get it right. You can always press ''Help'' to view a cheat sheet.
Important: Do not use any capital letters, the translator will think you typed it wrong!
After learning the characters, choose one of the other categories to start translating words. The categories are roughly ordered from easiest to hardest, with 'General' containing some basic Star Wars terminology and names whereas other categories also contain special characters and longer words.

Another way to learn Aurebesh is by writing in Aurebesh! Go to 'Write' from the Menu. Here you can choose the same categories, but this time you have to translate them to Aurebesh. After each word, the letters on the virtual keyboard are shuffled so that you will remember the actual letters rather than their location on the keyboard.

Good luck, and may the Force be with you! If you have any questions or suggestions, you can reach me at info@aurebesh.org.

If you want to learn the Aurebesh very quickly, this method is for you. You can change the font on your Windows computer to Aurebesh. This will change the font in the system text and many applications. Installation is simple.

1. First, download Aurebesh.otf, Aurebesh.reg and Reset.reg.
Files don't work? Try downloading and extracting this .zip file..
2. Double-click Aurebesh.otf and install it.
3. Then, make sure that you place the file 'Reset.reg' in a location where you'll easily be able to find it, such as your desktop.
4. Now double-click 'Aurebesh.reg' and press Yes. Restart your computer, and Aurebesh should now be your system font.
5. To change it back to normal, simply double-click 'Reset.reg', select Yes, and restart your computer.

Disclaimer: do this at your own risk! Aurebesh.org is not responsible if anything goes wrong. This method only works on Windows computers. It is not possible on a Mac. It is also not possible on an iPhone. It is possible on SOME Android devices that support changing the system font, but most Android versions do not support this. It can work on certain rooted phones. We do not recommend rooting your phone for this.

If you like this website, you can make a small donation to buy me a coffee or help with server costs. Thank you for considering making a donation.

Do you have any questions or suggestions? Feel free to send an e-mail to info@aurebesh.org.